Could our dry weather this year cause an increase in subsidence claims?

Home / Could our dry weather this year cause an increase in subsidence claims?

For the UK as a whole, the last six months have been the driest in 20 years and it was the warmest month of March ever in the southeast.  This is reflected in Met Office Rainfall and Evaporation Calculation System (MORECS) data, which measures soil moisture content, where currently – even after last week’s spell of wet weather – the conditions are very similar to those recorded in previous subsidence event years – specifically 1997, 2005 and 2006.

These very dry ground conditions at the start of the year are a clear indication that we could see an increase in subsidence claims in the months ahead, particularly if we have a dry summer.  Early* predictions from The Met Office is that high pressure is likely to dominate the UK in early June, which would bring largely warmer, drier weather for most, but it’s the rainfall and temperatures in July, August and September that will be critical.

Subsidence is the downward movement of a surface, causing the ground beneath the foundations of a building to become unstable.
Common reasons for subsidence are:
· The shrinking of soil beneath a property
· Previous mining activity on the site
· Ground vibrations
Soil shrinkage can be caused by a number of factors, such as
water leaking into the soil under the property, as this can
wash away the soil from the foundations. This is most common in soils with a high sand or gravel content.
Clay soils are particularly vulnerable to shrinking, and as the soil shrinks, it pulls the foundations which may
result in structural movement. Clay soil shrinkage can also occur following a dry spell of weather.
Tree roots surrounding a property can significantly influence the likelihood of subsidence occurring – as they
can cause the shrinkage or reduction of the soil beneath the foundations by extracting water. Tree roots
removing moisture from the soil is the most common reason for subsidence in properties.
Evidence of subsidence
There are many noticeable signs on the inside and outside of a house which will signal you towards the
existence of subsidence.
The usual indications of subsidence are: 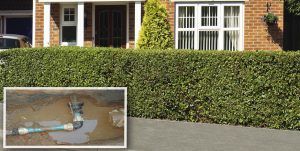 Until relatively recently, the method of constructing drainage around domestic buildings had changed very little since the Roman era. It involved the connection of short lengths of glazed stoneware pipes using organic seals covered with lime or cement. Because out of sight is very often out of mind, deterioration of the joints can lead to leaks.

The presence of leaking drains and the improper discharge of rainwater is the second most common cause of subsidence related damage to property. The degree of damage can vary enormously and will depend upon the geophysical property of the ground upon which the house is sited.
The most common occurrence is usually on sandy or silty ground when the water from the leak washes out the fine particles beneath the foundation causing voids which results in collapse or subsidence.
Alternatively, the continual leaking softens the ground in the area around the pipe, usually close to the house, and renders the ground incapable of supporting the weight of the house resulting in subsidence.

Although the age of the drain is usually indicative of susceptibility to leaking and that more modern methods using flexible joints are better it is by no means certain that leaks are unlikely … broken pipes or bad drain laying can be the cause.
Testing for leaks in drainage or proof of watertight operation is advisable if the pattern of superstructure damage suggests that leaks are occurring. This can either be done by applying a suitable pressure test or by observation from close circuit t.v. inspection.

If your house has suffered from subsidence in the past you may find it difficult to obtain adequate Insurance, or you may find that your Insurance company won’t be prepared to offer Insurance to the new owner if you are trying to sell …. if this is the case then give us a call on 01424251688 or 07596 695651 we can help